It has been said that in everyone's heart, there is a small town. The small town in Don Meredith's heart was always Mount Vernon, Texas. Although Don left his childhood home many years ago to pursue his dreams, he always held his small town values as his spiritual compass. He was heard to say, "I never had a burning desire to be anyone other than to be the best Don Meredith I could be." 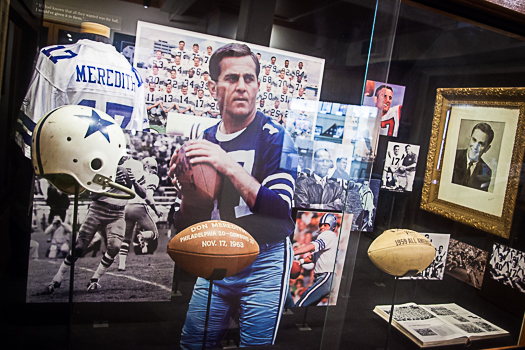 On April 10, 1938, Don was born in Mount Vernon, Texas, to Jeff and Hazel Meredith. Billy Jack, their first born was 5. Jeff Meredith began his career at the Parchman's Dry Goods Store on the town square, and eventually he owned and operated it as Meredith Dry Goods. He was a hard worker, always in jacket and tie, and reminded many of Clark Gable with his good looks. Hazel, with warm and twinkling blue eyes, was a devoted and loving mother. She had one of the first women's athletic college scholarships in East Texas as a basketball player..and helped keep the books for their store, some of which are included in this collection. The humor ran rampant within their home at 616 S. Kaufman Street. Each member of the family had a special way of looking at life. Billy Jack and Don carried this through their lives and created so much laughter.

Don's first job was at Meredith Dry Goods. At around the age of 6, he was propped on the counter by the front door and instructed by his dad: "Son, when you see someone come in that door, you greet 'em by their name. Even a dog likes to hear his name." This lesson stuck with Don throughout his travels. He always made others feel their best and always inspired them to be their best.

Billy Jack and Don were both outstanding athletes from early ages. Billy Jack went on to play football at TCU and then entered the business world enjoying tremendous success. There are many highlights in Don's athletic career, but a favorite happened in 1954. As a high school junior, Don set a record that still stands today by scoring 52 points at the Dr. Pepper Tournament in Dallas. This put small town Mount Vernon into first place for the whole state of Texas. 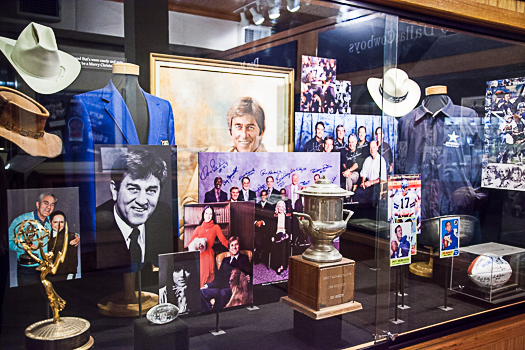 In high school, Don's football and basketball coach was the legendary Wayne Pearce. He said, "Don was probably better in basketball in high school than he was in football. He had the most confidence of anyone I've ever met."

Don went on to be All State in both sports, packing the stadiums wherever the Tigers played. He also was an "A" student, participated in 4-H, Future Farmers of America, Student Council, and was part of the Methodist Church Youth Fellowship. Under the tutelage of Charles Bruce, he performed in a school play . . . and a small seed was planted for later adventures in the film industry. Don was President of his senior class, and when here recently to celebrate his 50th high school reunion was still proudly wearing his Mount Vernon High School ring.

In 1956 Don entered Southern Methodist University and was elected freshman class president. He was twice elected an All American and led the SMU Mustangs to national prominence. While at SMU, Don met the bright and gracious campus beauty queen, Alma Lynne Shamburger of Wichita Falls, Texas. They married and were blessed with a beautiful daughter, Mary.

Following his graduation in 1960, Don signed a personal service contract with Clint Murchison before Murchison even had an NFL franchise. At that time Don would say: "I'm either going to be an NFL Quarterback, or I'm going to law school.

It is well known that he did join Tom Landry's fledgling Dallas Cowboys. "Dandy Don", as he was affectionately known, shared time under center with Eddie LeBaron before winning the starting job in 1965. Meredith led the Cowboys to three straight division titles and to consecutive NFL Championship games in 1966 and 1967. Dallas lost both games though to eventual Super Bowl winners Green Bay. In 1966, Meredith guided the Cowboys to their first-ever winning season. He was named NFL Player of the Year after throwing a career-high 24 touchdown passes and 2,805 yards. Meredith was one of nine Dallas players selected to the Pro Bowl that year. Although Roger Staubach and Troy Aikman made the Cowboys' quarterback job synonymous with greatness, both credit Meredith for launching that tradition. "He did it without as much help as some of the other guys had," said Lee Roy Jordan, a former Cowboys linebacker. "Our offensive line was not very good early on. He got beat up pretty bad, broken noses and collarbones and ribs, everything you can think of, Don had it. But he was one tough individual. He played with many an ailment and injury, and was very, very competitive. He and Bob Hayes really set the standard for the wide-open offense, the motion guys and big plays." He was a two-time Pro Bowl selection, and among many other recognitions, received the Bert Bell award as NFL Player of the Year. Over his nine-year career, Meredith threw for 17,199 yards and 111 touchdowns. He was noted for his outgoing nature, humor, courage, and toughness and retired from the Cowboys in 1969. In 1976 he was inducted into the Texas Stadium Ring of Honor, and the Texas Sports hall of Fame in 1977, followed by his induction into the College Football Hall of Fame in 1982. 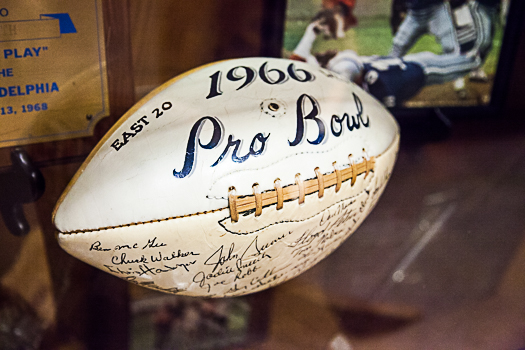 Meredith was one of the first athletes to make the transition from the field to the color analyst, and the move to calling "Monday Night Football" was an easy one for him. He was an original member of the Monday Night Football sportscasting team in 1970 along with Howard Cosell and Keith Jackson. Frank Gifford took over play by play in 1971. Meredith's quick wit and folksy humor, along with his "one on one" verbal confrontations with Cosell, turned him into a household name. He quickly became one of the most popular broadcasters in sports because of his folksy sayings and country humor. Meredith's signature call was singing the famous Willie Nelson song "Turn Out the Lights" when it appeared a game's outcome had been determined. He lifted the national morale with his style and down to earth persona. In 1971, Don received an EMMY award for television sportscasting.

During his 12 years on Monday Night Football, Don's frequent stories on the air about Mount Vernon turned his home town into a nationally recognized community and "Jeff and Hazel's baby boy and Billy Jack's younger brother" was his oft' repeated self-description.

Don spent 3 years broadcasting with Kurt Gowdy and others at NBC. During this time he moved his family to California and expanded his career in the entertainment field. He made some movies, did many Police Story segments, co-hosted The Dinah Shore Show for a year, and enjoyed being a spokesman for companies like Lipton Tea, Nabisco, RJR, and K-Mart: He also had fun with some theatrical productions, including Neil Simon's "Odd Couple" (Don playing Oscar to Frank Gifford's Felix).

To the time of his death Don and his wife since 1972, Susan, pictured with him above, lived in Santa Fe, New Mexico and Palm Springs, California. They enjoyed supporting charitable causes, celebrating the joys of life with a large nation-wide extended family of endearing friends, children and god-children, and their four dogs. In 1997, Don and Susan Meredith demonstrated their commitment to the youth of Mount Vernon by establishing the Don Meredith Humanitarian Scholarship in memory of Jeff and Hazel Meredith, which is in partnership with the Mount Vernon Rotary Scholarship Trust. The recipients are nominated by the senior class at Mount Vernon High School based on character and community commitment. A boy and a girl are awarded financial assistance with their college education each year.

The Don Meredith Memorabilia Exhibit was developed to encourage young people to pursue their dreams. As they review the visual mementos of Don's life, it is hoped that they will be encouraged to be "the best they can be."

To read more about Meredith, try these books:

Cowboys Chronicles: A Complete History of the Dallas Cowboys, by Marty Strasen
Cowboys Have Always Been My Heroes: The Definitive Oral History of America's Team, by Peter Golenbock